Salvat, an international laboratory that develops and manufactures products such as Cristalmina, Cetraxal, Tebarat, Levogastrol, Monolitum and Relive, is completing the Phase II clinical trial of a new treatment for non-consolidated long-bone fractures (pseudoarthrosis). The clinical trial was approved by the Spanish Agency for Medicines and Medical Devices (AEMPS). In the trial, patients are followed for one year after the product’s application to test its efficacy, by assessing fracture healing. This project has been carried out in collaboration with the biopharmaceutical company Histocell, which specializes in regenerative medicine and cell therapies. All the patients have now been enrolled and included in the follow-up phase which will be completed by the end of 2020.

Salvat’s new treatment is based on pre-differentiated mesenchymal cells that are implanted in a calcium phosphate biomaterial and applied directly into the lesion site. The development of this therapy has required an investment of 6 million euros.

Salvat is currently completing the Phase II clinical trial and the results are very promising. The research is being conducted at the Teknon Medical Center in Barcelona and the Hospital Universitario La Paz in Madrid. Patients affected by atrophic pseudoarthrosis have serious problems in consolidating their bone fractures. In fact, in many cases, the fractures must be re-intervened surgically on several occasions, and at the moment, there is no effective treatment in these medical circumstances. This presents a life altering limitation in the daily functionality of patients, as well as a very high health expenditure due to the cost of medical care. BONECURE is intended to achieve a better and faster bone consolidation and due to its mechanism of action, a more complete functional recovery.

After completing this phase II study, Salvat plans to begin phase III clinical trials in 2021. The goal is to reach an agreement with the Spanish and European Health Authorities for this trials, and additionally to assess the possibility of extending the research to other bone pathologies. This new treatment could be marketed in Spain and throughout the European Community by 2023 and thereafter internationally.

Long bones are the most difficult to consolidate

The new treatment is indicated for pseudoarthrosis or broken bone that has not consolidated. Usually a period of 9 months is required before a fracture is considered to have healed appropriately. Although it is not a very frequent complication (4% of fractures), pseudoarthrosis requires a great deal of attention from Traumatologists and some cases require more than three operations. In addition, many patients experience a great deal of pain and dysfunction.

Long bones are more susceptible to breaks and are the most difficult to heal and consolidate. For example, the fracture of the tibia is one of the most common bone fractures and also, one of the most likely to develop pseudoarthrosis.

Salvat Pharmaceutical group is making moves to strengthen its international position with Cristalmina, a chlorhexidine-based antiseptic used to protect wounds, burns and the umbilical cord from infection. The product already accounts for 20% of the group’s total turnover in Spain.

In the last seven years, Salvat’s flagship brand has tripled its sales, with turnover increasing from three to nine million euros. Cristalmina is the market leading antiseptic in Spain with sales of almost three million units per year.

Salvat is now preparing an international launch for the end of next year. The pharmaceutical laboratory commissioned a new automated robotic production line six months ago at its Pharmaloop production plant in Alcalá de Henares, to speed up production of Cristalmina. While production was previously limited to 2.5 million units per year, the new line has a capacity to produce 15 million units, most of which will be exported.

According to Alberto Bueno, General Director of Salvat, “The company intends to sell Cristalmina globally, a strategy made possible by the Pharmaloop plant and our new robotic line that is enabling us to manufacture sufficient units to supply international markets”. 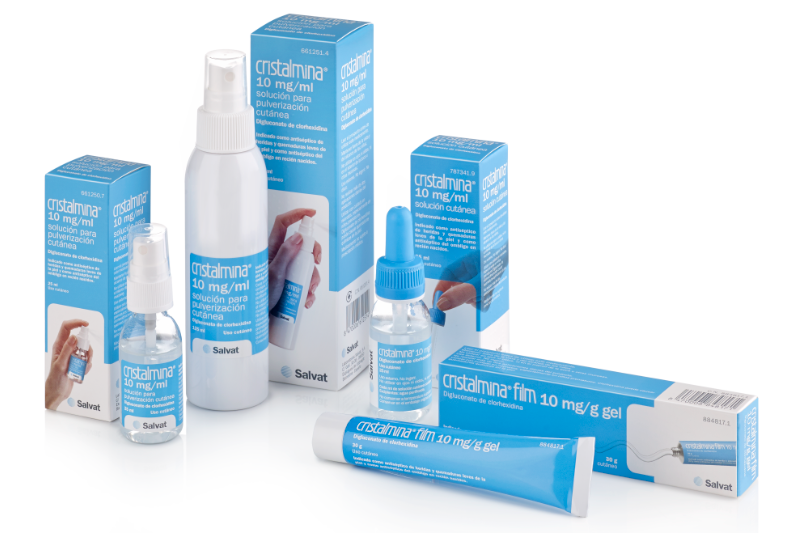 Europe, Asia and the USA

By year end, the regulatory documentation will have been presented to the Spanish Agency of Medicines and Medical Devices (AEMPS) to start the authorisation process for other European countries, which could take up to a year. By 2022, the company expects to be selling Cristalmina in countries like Germany, France, Belgium and Italy, among others. The second phase will take this product to the Asian market where Salvat is already working in China, South Korea, Indonesia, Malaysia, Singapore, the Philippines and Vietnam, as well as the Middle East and North America.

Alberto Bueno said that “Cristalmina is an example of how a commitment to innovation and use of the latest pharmaceutical manufacturing technologies can help Spanish products to achieve international success.”

Cristalmina was one of the first products launched by Laboratorios Salvat and soon became the choice product for disinfecting minor wounds and burns in both the home and the workplace. It is recommended by health specialists in Spain, since chlorhexidine is the main antiseptic used in both primary care and in hospitals.

One of the products from the Cristalmina range has been widely used for antiseptic purposes during the COVID-19 pandemic, helping to protect people against the spread of the virus.

Salvat, laboratory that manufactures products such as Cristalmina, Monolitum, Relive, Levogastrol and Cetraxal, expects the approval and launch of the first topical medicament for the treatment of otomycosis in just over a year in USA and Europe. This commitment reinforces Salvat’s position as a world leader in the field of otology.

Clinical trials, agreed with the FDA, began at the end of 2019 and are scheduled to end this year. These studies will include 400 adult patients affected by otomycosis, mainly from hospitals in the US and Spain and with the participation of other countries such as Mexico, Portugal, Bulgaria and Romania.

For Alberto Bueno, Salvat’s General Manager, “this project is a reflection of the firm R&D commitment we have made in the area of otology, and reinforces our leadership position in this therapeutic area, without losing focus on other areas of strategic growth for Salvat. Only in 2019, we have invested 10 million dollars in R&D, which represents 15% of our whole turnover”.

Otomycosis is a type of external otitis caused by an acute fungal infection that affects the ear canal. It is estimated that approximately 10% of people living in developed countries suffer from at least one episode of this kind of otitis in their lifetime1.

This medicament in development is a major advance in the treatment of otomycosis. It is hoped that, thanks to its topical and localized application, it will become a more effective solution to otomycosis, which currently has no approved treatment.

In the regard of the expansion of the Pharmaloop plant in Alcalá de Henares (Spain), it is expected to be complete by 2020, which will have involved an investment of more than 35 million euros and the creation of more than 100 jobs.

Otorhinolaryngologist recognize Salvat as the number one company in the development of treatments for otology. This new medicament for the treatment of otomycosis confirms Salvat’s commitment to this medical speciality and the company’s desire to consolidate its leadership in the treatment of ear diseases.

Japanese companies from the pharmaceutical sector visit Pharmaloop’s facilities (a Salvat company) through @ICEX and @IcexJapon. 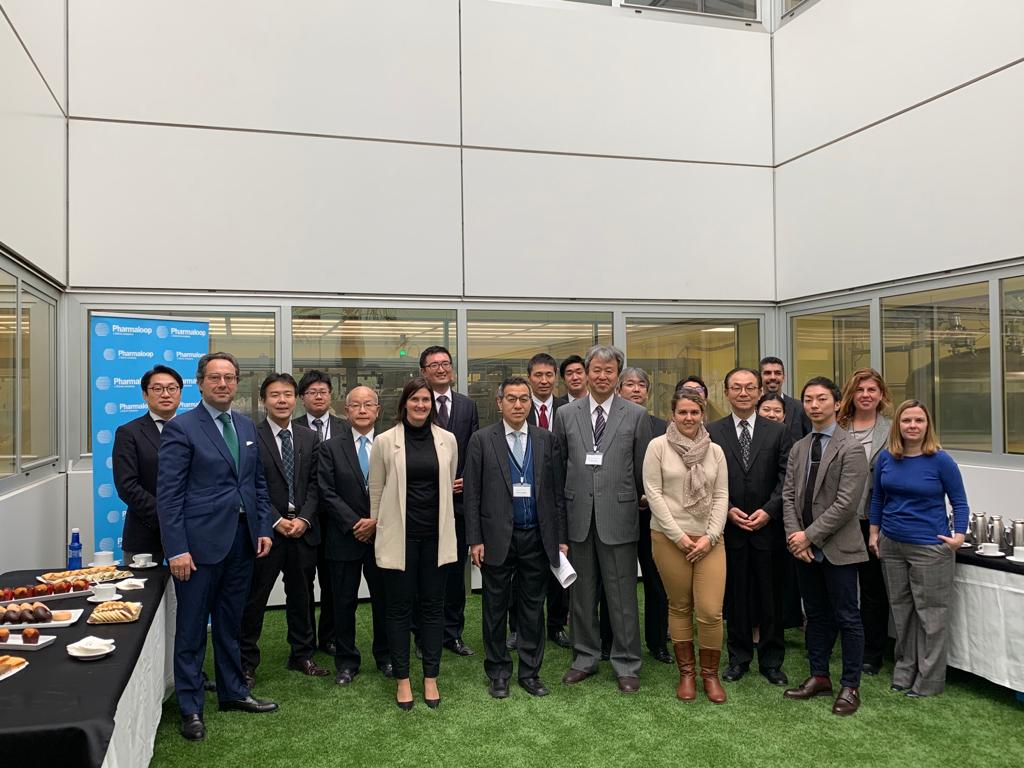 On the 5th, 6th and 7th of November, the city of Frankfurt hosted one of the largest events worldwide in the pharmaceutical industry, bringing together over 45,000 visiting attendees and 2,500 international exhibitors: CPhI Worldwide 2019.

Salvat and Pharmaloop teams held numerous meetings with current and potential partners from all over the world of the pharmaceutical industry, to explore new business opportunities, both in licensing our products, and in offering our development and manufacturing services. 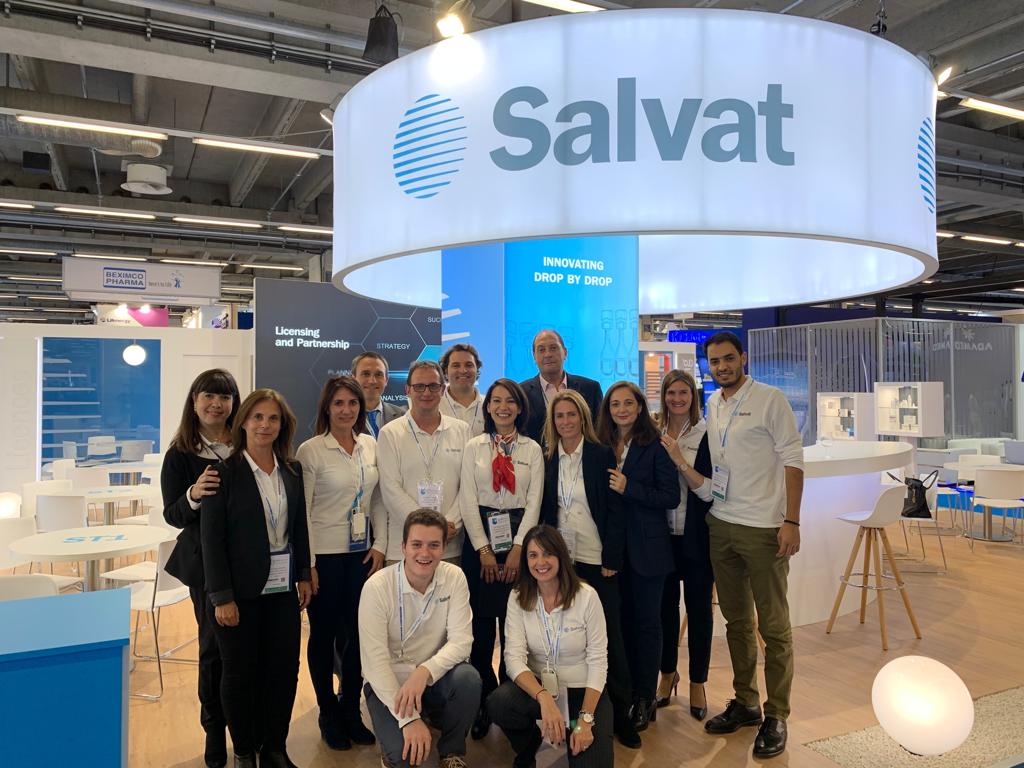 Salvat was present at the world’s largest pharmaceutical biotechnology event: The Bio International Convention 2019, which took place this year in Philadelphia (USA), from June 3rd to 6th, where meetings were held with companies from the pharmaceutical industry from all over the world. The aim was to explore new business opportunities for licensing our products and offering our development and manufacturing services. 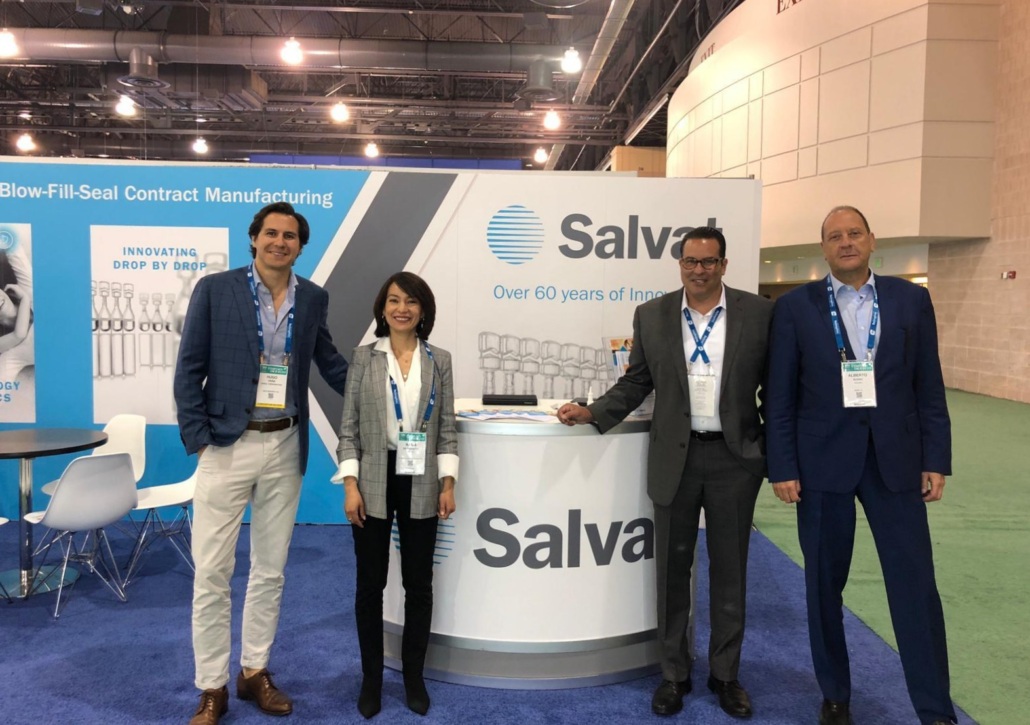 Salvat participated in the CPhI North America Congress, which annually gathers the most important companies of North America. This year it was held in Chicago, where we held many meetings with other pharmaceutical companies to explore opportunities that allow us to continue developing our activity in the United States. 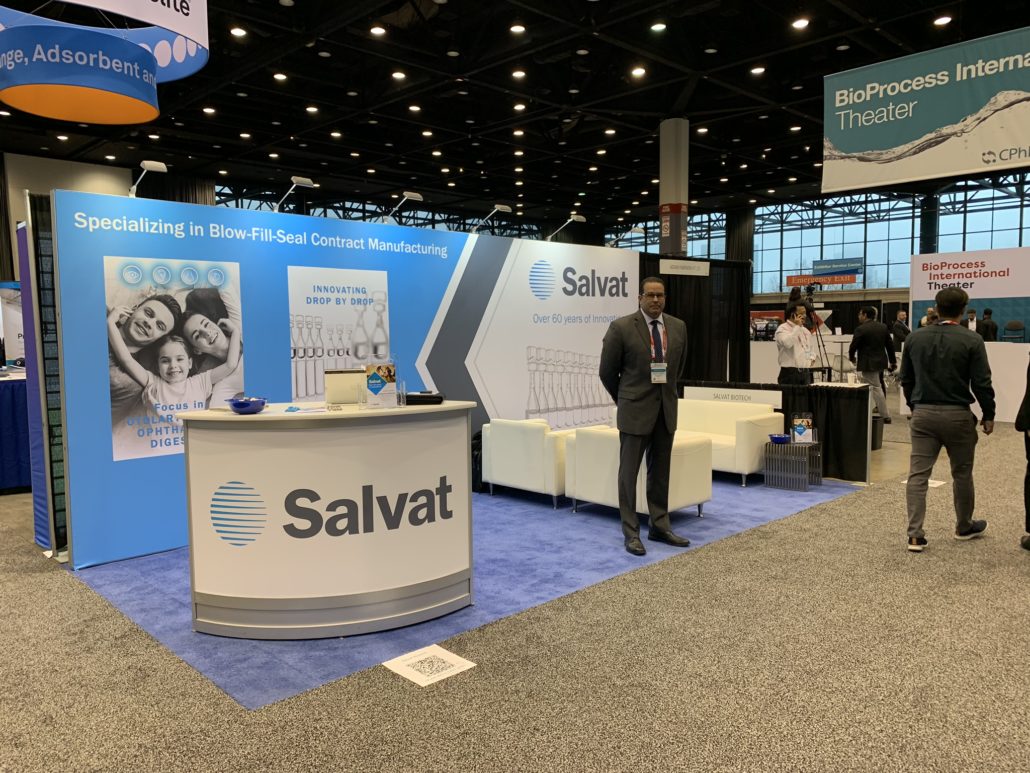 Salvat and Pharmaloop participated in the CPhI Worldwide Congress, which annually gathers the most important companies in the pharmaceutical world. This year it was held in Madrid, where both companies had the opportunity to hold many meetings with other pharmaceutical companies to explore opportunities that allow us to increase our activities internationally. 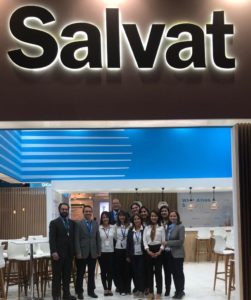 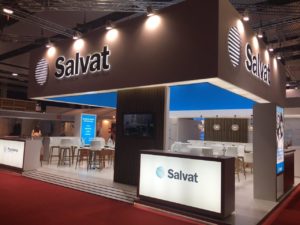 On August 30th 2018, the enrolment of patients into the CIFLOTEX clinical trial was completed. This study has been carried out in 45 US centers, and 493 patients suffering from Acute Otitis Externa (AOE) have been included. The objective of the study is to assess the efficacy and safety of our combination of Ciprofloxacin + Fluocinolone (OTOVEL® in the US) administered as otic drops in single-use vials, when compared to Ciprofloxacin and Fluocinolone alone. The study had been requested by the FDA in order to obtain data of OTOVEL in the treatment of AOE, before approving this indication, which would be added to the currently approved AOMT (Acute Otitis Media with tympanostomy tubes). The final results of CIFLOTEX will be available before the end of this year.

Salvat was part of the most important International Biotechnology congress, which was held at the Boston Convention Center (Massachusetts, USA) from July 4 to 7, 2018.

BIO is a unique opportunity for companies in the pharmaceutical industry to establish relationships of scientific and commercial nature, as well as close deals and explore further collaborations with partners.

One of the success factors of this gathering is the exceptional opportunity it represents for companies to participate in the Partnering dynamics organized during the Congress.

In the picture, Frank Padron (Head of North America Marketing&Sales) and Hugo Peris (Member of the Board)

This web uses cookies (including some third party) to facilitate the use of our website. By browsing this web or using its services, you are accepting how we use these cookies. However, you may change the cookie configuration at any time.

Aceptar / I accept
Scroll to top