We present Ekzem®, the first and only medicinal product indicated for the treatment of eczematous otitis externa
Up until the recent release of Ekzem®, launched by SALVAT this January 2017, there was no medicinal product in Spain specifically indicated for the treatment of eczematous otitis externa. Up until now, otorhinolaryngologists, primary care physicians and other specialists saw the need to employ steroid preparations that weren’t specifically designed to treat acute outbreaks of intense itching, oedema, redness and flaking, which are characteristic of eczematous otitis externa; a very common diagnosis in appointments with both ear specialists and the family doctor.
Eczematous otitis externa is an extremely common pathology, of which there are no incidence or prevalence data in our community. Whilst it is not considered to be a serious disease, eczema of the ear can have a significant negative impact on the quality of the life of those who are affected by it, mainly due to the intensity, maliciousness or duration of the itching that it causes. The usual scraping of the canal with cotton swabs, or by other inadequate means, can cause injury which can lead to infections of the skin of the external auditory canal. Therefore, for acute outbreaks, specialists recommend treating the symptoms properly and quickly through the use of mid-strength corticosteroids, and also recommend using emollients and moisturisers for those who suffer from the problem chronically.
Ekzem® contains 0.025% fluocinolone acetonide, a mid-strength corticosteroid which is capable of producing an anti-inflammatory, anti-pruritic and vasocontrictive short term effect. In the mandatory clinical trial – multicentre, randomised and double-blind versus placebo – conducted by Laboratorios SALVAT to obtain the new indication for this corticosteroid, it was shown that Ekzem® reduces the intensity of the itching by an average of 40% in the hours immediately after treatment. By the fifth day of treatment, having applied twice daily on the affected ear, the intensity of the pruritus is reduced by more than 70%. At the end of the study, the clinical signs are reduced by 84% in the case of erythema; 83% in the case of oedema; 85.2% with regards to flaking and 85.2% in the otoscopic signs considered as a whole. After this period, there is an 81.8% reduction in the scale of itching.
Each Ekzem® container contains 30 single-dose vials for a symptomatic treatment of up to 7-8 days. In the case of bilateral eczema, a vial will need to be used every 12 hours in each of the eczematous ears. The vials come grouped in strips of 15, each protected by an aluminium sachet that will keep the active substance stable for up to 2 years, meaning it can be used in any outbreaks that occur throughout this period. 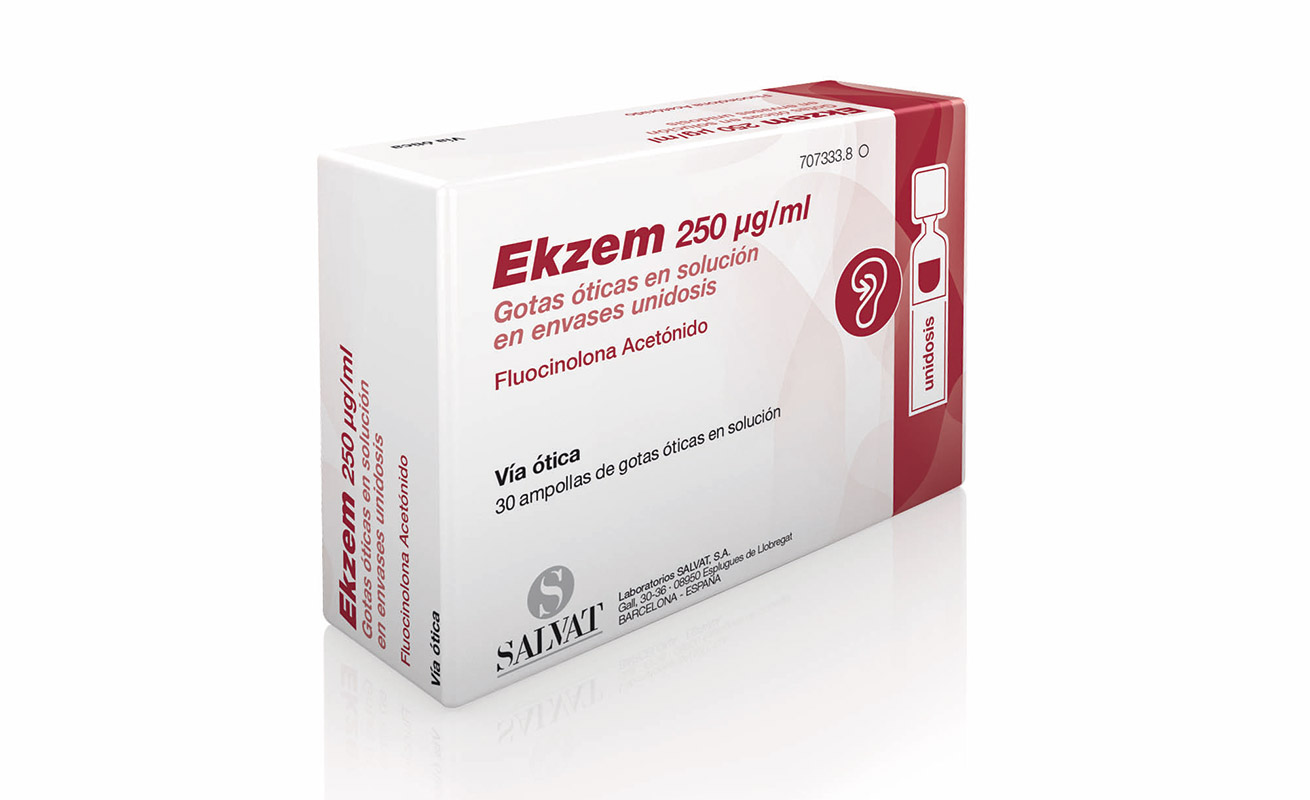 These cookies collect information about how visitors make use of the website, such as page views, loading errors… It is generic and anonymous information where personal data are not included nor collects information that identifies visitors; with the ultimate aim to improve the functioning of the website.

SAVE & ACCEPT
Scroll to top